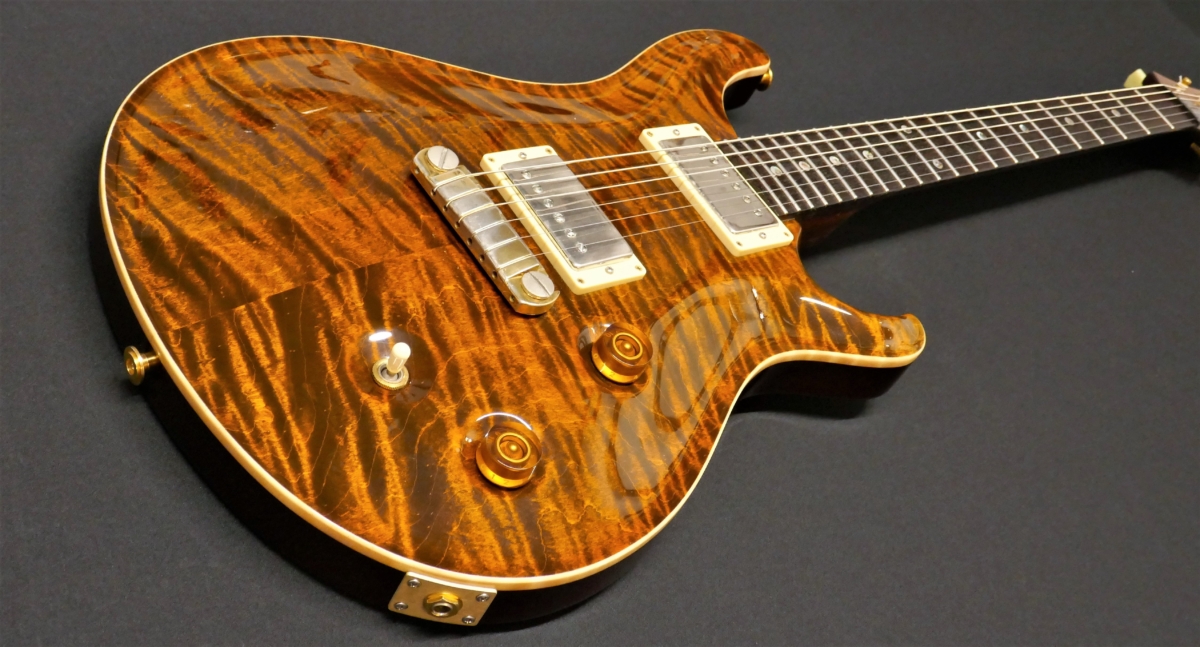 Cast your eyes over this delectable used PRS Custom Built McCarty and you’ll probably agree with me, that the pictures portray all the character and aesthetic beauty that this guitar possesses, far more adequately than typing a host of descriptive adjectives  – Yet my web site pics do not capture its full beauty, as it looks far superior when viewed in the flesh – That highly figured maple top looks ‘flat’ and one dimensional, when you look at the web site pics, as it does not capture the true ‘3D’ character when viewed in the flesh – Hold the guitar and twist it around a touch and look at the top from different angles and lights and you’ll see exactly what I mean – There is a bit of a story to explain the ‘Custom Built’ nature of this used McCarty from 2002 so please read on

Around 2001/2002 a discerning UK collector of PRS Guitars had ordered a Single Cut Dragon, of which only 100 were ever built – Meanwhile all orders had been fulfilled/allocated to various other dealers throughout the world, so the bottom line is that Headline Music (PRS UK) never received their required order – To make amends, Headline commissioned three very special ‘Custom Built’ models to be built exclusively for the UK collector – Gavin Mortimer (Headline Music MD),  requested his friends at PRS Guitars, Joe Knaggs and Dave Hazel, from the Private Stock team, to oversee the build of these three guitars, as a big favour to him – Back in 2002 and there was a clear defined line between production models and any Private Stock models – Today this line is far more blurred due to special Wood Library models and before that, around 2004 onwards, for the original PRS Modern Eagle – This Custom Built McCarty certainly had its feet in both camps – Yes it was built on the production line, but a) the highly figured maple top was picked by Joe Knaggs from the Private Stock stash b) the same applies to the solid Brazilian Rosewood fingerboard and neck and c) the tiger eye finish was only available on Private Stock models – Some may well recall in 2000, that PRS built a run of 250 McCarty models, that were spec’d with a Brazilian rosewood fingerboard/neck, but the figured maple tops were far more ‘mundane’ in comparison to the Private Stock top on this Custom Built McCarty – As I mentioned earlier Joe and Dave oversaw the whole build and signed off the completed model for Headline Music – The guitar does include its original factory tag,  but no factory product/modcat code, on either the tag, case or on any label within the pick-up cavity, due to its nature as a one off, custom built  model with features not available, at the time, on any production model – Yet on both the tag and within the pick-up cavity you can clearly see ‘Headline Music’ to indicate such exclusivity  – There is a letter from Headline Music and Gavin Mortimer (MD) to indicate the above – I’ve known Gavin both as a friend and via our business activities, for over 40 years now and had a chat with him about the whole story with regards to this McCarty – The letter is addressed to Peter, a collector who I’ve known for a number of years and now I have the pleasure on selling this guitar on his behalf – This guitar was effectively built on an exclusive basis yet ‘off the radar’

I will list below, in no particular order, a host of details below regarding this 2002 Custom Built McCarty :-

Tonal Character :- The custom wound paf flavoured neck pick-up (measures 7.85K) is brimming with a fat, warm and smooth character, that is very much vintage flavoured, with an extra ounce of articulation, so never at any point does it sound muffled – The bridge pick-up is custom wound with a few additional windings (measures 8.5K) , to deliver an extra touch of bite and sustain, which I’m sure you’ll require as you rip into some solos passages, but not at the expense of loosing any tone, hence it hangs on to all its natural dynamics, whilst retaining that lush vintage flavour – Push it to 10 and it whaillllllllllls – Playing this instrument through a good amp for a few minutes, you quickly realise that you have probably never had so much musical tone and emotion handed to you on a plate – Back off on the volume pot and you’ll retain the same quality of tone, allowing you to clean up an ‘overdriven’ amp setting, as such you are totally in control of the expression that you require – If that is not enough then lift the tone pot up, which allows you to delve in to the world of single coil, to obtain some excellent Strat flavoured voices – Maybe not ‘Little Wing’ at its absolute finest, but nevertheless  very useful and certainly superior to many budget priced Strats – Over the years I’ve sold, owned and played various PRS models with a Brazilian rosewood neck/fingerboard and in all cases the neck helps to deliver a warm and lush tone with smooth, rounded highs – I’d say maybe more of the soft side of Karen Carpenter or Dionne Warwick – Or More Paul Rodgers rather than Axel Rose    This truly is a guitar players guitar  and will give pleasure and pride to any owner/collector/player for many years to come