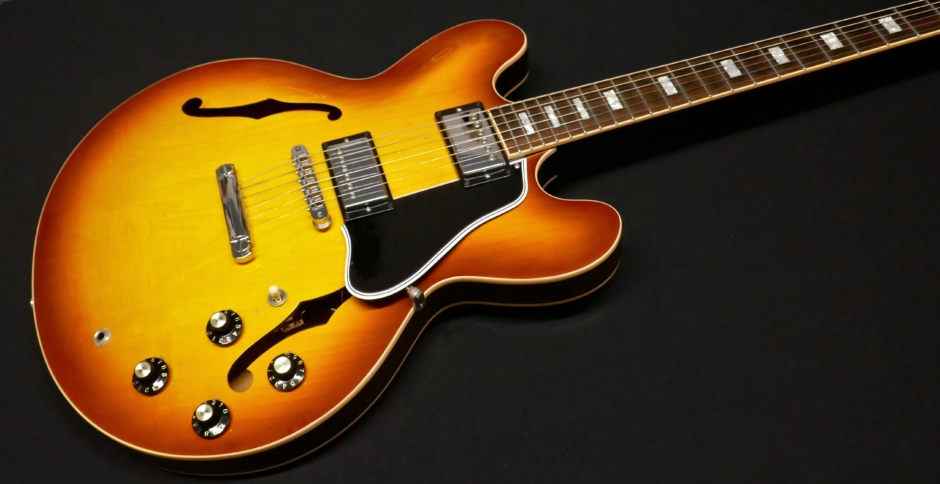 Today, I can offer for sale a used, yet exceptionally clean, Gibson Custom Shop Larry Carlton ES335, with a vintage sunburst finish, all the way from Memphis Tennessee   – I always think there are both positive and negative factors with regards to any signature model – Some signature models are very much aimed at a specific style of music – ie The Ibanez Steve Vai Jem models – As such, these guitars tend to sell to players who wish to play a similar genre of music – The ES335 Larry Carlton Signature model will always attract the many fans of Larry, who favour jazz/blues/fusion styles – Yet at the end of the day, this is really just another nice 335 – As such, like any other 335, it has the flexibility to work effectively within a host of genres of music- 2023 will be the 65th anniversary of the 335, as such it could easily put its feet up and retire – The 335 has spent longer in the catalogue than any other Gibson electric guitar – That shows both its popularity, plus its ability to adapt to so many different forms of popular music – From rock n roll, to the 60’s pop invasion, to the super groups of Cream, thru’ 70’s Glam Rock, to jazz, blues, fusion, Brit Pop, Indie, Funk etc etc – So don’t be put of by the Mr 335 engraved truss rod cover – Just think of it as a very good 335, based on a model from the late 60’s era, that is a very versatile instrument

The LC ES335 was initially released for a short period during 2002, then re-listed in 2004, from the Custom Shop facility – An original vintage 335, from the mid/late 60’s era, would have been factory spec’d with a trapeze tailpiece – Larry, like a lot of owners of such a guitar, have in the past, carried out various ‘upgrades’ with a view to ‘improving’ the guitars playing performance – As such the LC335 is a replica of the guitar he has toured and recorded with for many many years – Hence not so much a replica of an all original 1968 model – The most common change was to replace the factory trapeze tailpiece, with a stop tail option,  as was often the addition of a set of Schaller, or Grover machine heads – Schaller M6 models in the case of the LC 335 – Other factory spec’d features of this LC335 includes a set of medium/jumbo frets, that are now installed over the binding, so no nibs – Then add a graphite top nut – Otherwise most details are as per a mid/late 60’s 335 – Maple/poplar/maple laminate body – One piece mahogany neck – measures .832″ around the top nut end and fattens out to 1.004″ around the 12th fret –  Bound rosewood fingerboard – 17 degree headstock pitch – 19th fret neck/heel join – Custom Shop decal on the rear of the headstock – Gibson + crown inlay on a holly veneer – Engraved ‘Mr 335’ truss rod cover – Small pearloid block fingerboard inlays – Orange f-hole label as per 60’s 335’s – 24.75″ scale length – 1 5/8″ nut width –  Black witch hat/amp control knobs – Chrome hardware inc Nashville tune-o-matic bridge – Gibson custom wound Classic 57 humbuckers – both measure 7.62K   – Additional info :- whole guitar weighs 8lbs and 5oz  – Includes the appropriate Custom Shop certificate/wallet as well as the deluxe black Gibson case  – Condition wise then this 335 is exceptionally clean – Not quite deserving of that ‘as new/mint condition’ tag – Look very carefully on the gloss finish and you might find a couple of subtle grazes, to the top surface of the finish – But subtle is the key phrase – I know the previous owner and can confirm it has home use only, well cared for and played sparingly

Additional comments inc feel/playability :- Eagle eyed viewers may well have noticed that the distance between the bridge and tailpiece on the LC335 is slightly wider than that of a regular ES335 – I’m never sure if this was a request from Larry, an error at the time Larry had the modification carried out on his 68 335, or indeed a feature that the appropriate guitar tech favoured – But it is a feature of both the Gibson LC335 replica and Larry’s own modified 68 ES335 – Some will say such a distance, between the bridge and tailpiece, will ease the string tension – Many will know that Larry and Robben Ford have a good relationship and indeed it was Larry that introduced Robben to his guitar tech – So a few years later when Robben wanted to ‘modify’ his mid/late 60’s Epiphone Riviera, from trapeze to stop tail, he had the work carried out by the same guitar tech and copied the same distance from bridge to stop tail – Around 1965 Gibson decided to change the nut width from what we know and accept as a standard feature on most Gibson Guitars – From 1 11/16″ to 1/5/8″ which equates to that of many Fender Guitars – Hence the original 1968 335 of Larry’s has a 1 5/8″ nut width and as does the LC335 – The neck profile is again based on an original 68 model – Today Gibson call it a 1960 slim taper – Maybe somewhat of a confusing tag – Yes slim refers to the more narrow 1 5/8″ nut width – But the actual rounded C neck profile possesses a comfortable amount of girth – It measures .849″ around the top nut end and fattens out to .970″ around the top nut end – So fatter than most 60’s Fender Strat/Tele models – Whilst it is not as fat as say the Custom Shop R7/R8/R9 replica Les Paul models,  it is not fair to compare such profiles, as the more narrow fingerboard width makes the whole guitar feel different – Overall I’d say it is neither chunky or slim, but it does possess a comfortable amount of meat – A chunky set of medium/jumbo frets certainly enriches the whole feel/playability – Again such a spec is now a feature of LC’s original 335, which had been re-fretted – So once again Gibson have a applied such details to his signature model – Re-strung with a set of 10-46 gauge strings and set-up with a slinky action that responds to a light touch – As such those cascading licks and tricks should be more comfortable to handle

Tonal character :- Maybe a tough one to call without stating the obvious – Yes with the right amp setting, then yes you can hear the clear overdriven tones that inspire Larry – Far more articulation on such a guitar with transparent mids – But as I have mentioned above, such a guitar is not just ideal for the jazz/blues/fusion styles of Larry Carlton – On clean amp settings then try out some cool jazz/blues chords and licks – Or indeed the crisp jangly tones of 60’s pop – Over load the amp/pedal with plenty of gain to try out rock/grunge tones and again hear why a 335 is so versatile – To me, my favourite setting is to select just enough gain on the amp, then roll back the guitars volume pots until you find that sweet spot, were you  have just enough gain to add character and to stop it sounding to pure – This is ideal for chord work and/or melodic riffs and licks – Then when you require more gain/bite/attitude/sustain, then simply wind the guitars volume pots back towards 10 – As such the guitars volume pots allow you to interface with the amp/pedals overdrive level, to maximise the amount of soul, expression and emotion that is available to you – It is this feature that players like Larry Carlton have mastered to give them so much more expression – Like a sax player or singer you can be soft/sultry, or ‘more angry’ as required