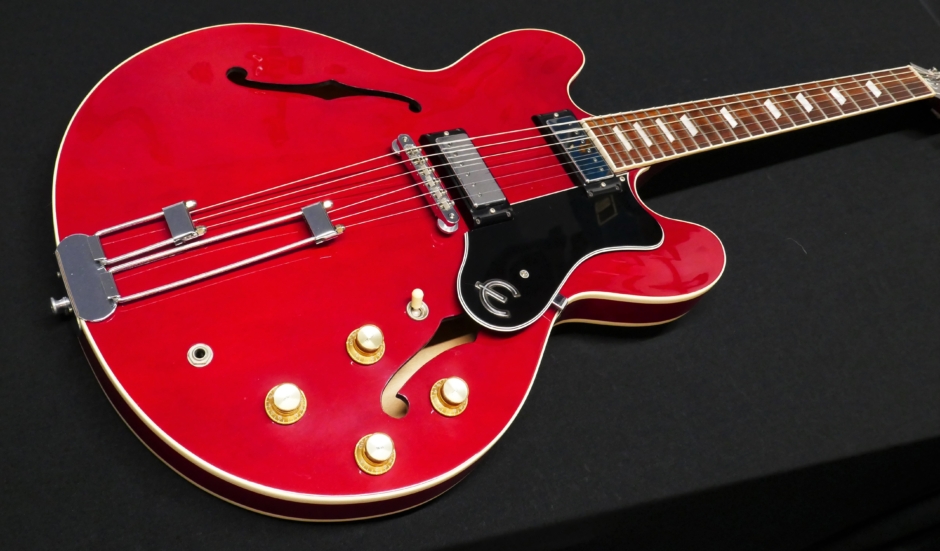 Before I type out a load of info with regard to this used, Limited Edition USA built, Epiphone ES360TD Riviera, from 1993, can I start off with a quick history lesson – Today most of us are familiar with a host of Epiphone models that have poured out of various Asian facilities, for a number of years now – But are we all familiar with the original Epiphone Company, that first established its roots, within the Ottoman Empire, during the late 19th century, before moving to New York in 1908 – During the hey days of jazz, swing and blues in the 30’s, 40’s and 50’s then you’d find many guitarists playing a fine Epiphone Arch top – Gibson acquired the company in 1957, later moving all the Epiphone production to Kalamazoo – As the Gibson thinline 335 style models arrived in the late 50’s, followed by various SG models in the early 60’s, then Epiphone followed accordingly with similar models – At this point in time, Epiphone was not a lower grade option than that of Gibson – Both guitars were built by the same team of luthiers, with the same grade of materials and offered for sale with a similar price tag – In America, guitar dealers would have an exclusive agency for Gibson Guitars within their town – Yet an another dealer, in the same town, would have access to the Epiphone range of models – So in many ways, the Gibson company, owning both brands, could have two bites of the cherry – Models like the Gibson ES330 and the Epiphone Casino are effectively the same instrument – Whilst the 335 and Riviera possesses many common features – Ditto the Gibson SG Junior and the Epiphone Coronet – In short the Epiphone Riviera is a Gibson ES335, certainly with regards to the wood work side of construction – The major differences are with regards to idiosyncratic features, that are part of the Epiphone company – ie Mini humbuckers, the Frequensator tailpiece and the E stamped truss rod cover + pick guard

Today all Epiphone models are produced from various facilities within the Far East – But occasionally, over recent years, Gibson have produced an American  Epiphone model, from one of their USA facilities – The Limited Edition John Lennon Casino model springs to mind, along with a John Lee Hooker Sheraton signature model – Around 1993/94 Gibson produced a limited run of 250 Riviera’s from the Nashville plant  – It is not a direct replica of a Riviera from a specific year, ie 1964 or 1967 – As it in some ways captures features from the mid 60’s era, rather than  one specific year – ie the cherry finish was not available as an option on a Riviera until around 1966 – The Royal tan burst finish was really the trade mark finish on such a guitar and I believe the only finish available up to around 1966 – Equally this Riviera has the traditional 1 11/16″ wider nut width, which Gibson/Epiphone finished with around 1964 – As such, many Riviera models that you’ll find from the mid/late 60’s era have the narrower nut width – Please note, this is the first time that a USA Epiphone Riviera has been produced since the original model from the 1960’s

Stevie Ray Vaughan was known to have occasionally played a Riviera – Robben Ford has recorded and toured with a Riviera – Add Jorma Kaukonen and Nick Valensi (Strokes) to a list of known guitar hero’s who have favoured the Riviera – Even Carl Wilson (Beach Boys was a fan albeit with the very rare 12 string version) – Maybe like the 335 it is not a guitar that fits into a specific style of music – It is flexible enough to work in many different genres – The mini humbucker produces a more crisp ‘Straty’ voice than you’d acquire from a traditional humbucker, yet retains humbucker girth – Yet far more fat than a traditional single coil Strat pick-up, yet still retains single coil clarity – More jazz/fusion/blues than hi-gain blues/rock – Excellent for Indy Brit/Pop and 60’s jangly pop – As an overview I’d say the Riviera’s character suits clean, subtle gain, or blues gain, amp settings, whereby the guitars natural voice can be heard – Sure you can load the amp with hi-gain for grunge if required – But in my opinion it is more Steely Dan and less Metallica – The tone is lush but very clear – The neck pick-up is very warm, rich and smooth with incredible clarity, so all the notes can be clearly heard when you play any fancy jazz flavoured chords – The bridge pick-up is far more bright, but not thin, weedy or brittle – Set up the amp with some gain, then wind back the guitars volume pots just a touch until the amp cleans up – With this clean/chilled out voice the Riviera still retains its true characteristics, as such it is a great place to set up ‘base camp’ – Then when you require additional gain and bite, simply wind the pots back towards 10 – As such you and the guitar can control the amp, which ensures no shortage of soul and expression at your fingertips – To some players it may well be the only guitar you’ll favour/need – To other players it is a guitar than will enrich any collection – Overall a very tasty and classy instrument that is a joy to play, feel and listen to